I don’t suppose many (if any) of us will get an invitation to have a look around Roman Abramovich’s super yacht Eclipse, the 162m state of the art craft which boasts 2 swimming pools (one of which can be converted into a dance floor), a missile defence system, a personal submarine, armour plating, bullet proof windows and an anti-paparazzi system that dazzles digital cameras.

There is a super yacht albeit from a different era that, as divers we can have a good look around.

Warrior in all her glory

I am talking about the Warrior II, she now lies in about 54meters of water south east of Portland Bill. 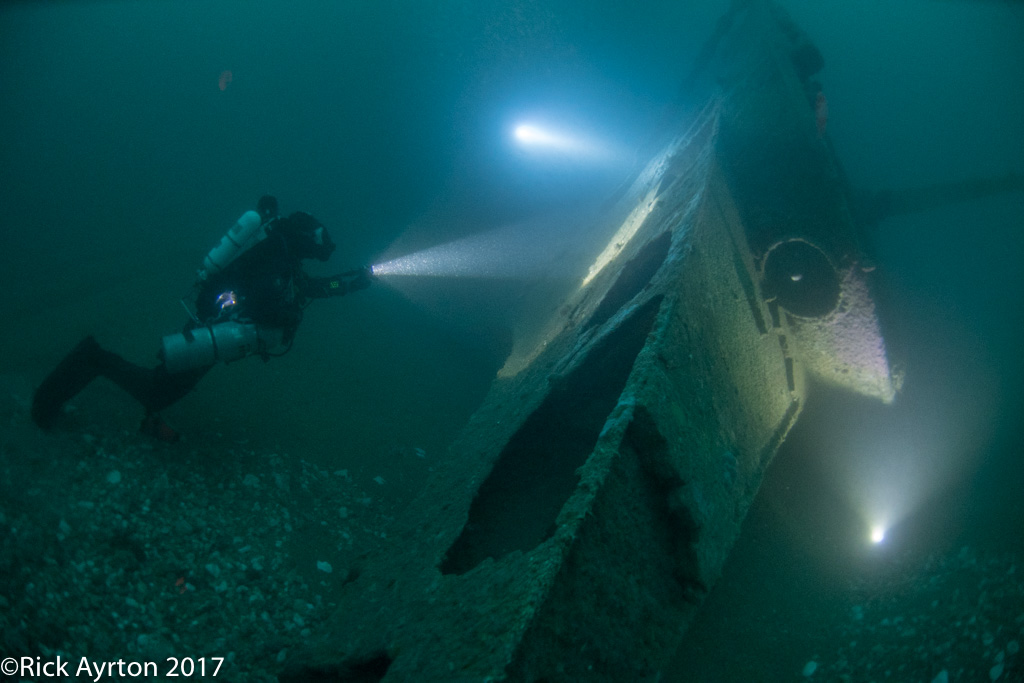 Lighting up the Warrior 2 bow, note the circular hole for the bowsprit

When Warrior was originally ordered by American tycoon Frederick Vanderbilt, no expense was spared. She was constructed by the Ailsa shipyard, Troon and launched in 1904. Fitted out luxuriously in 1700’s French style she was 284 ft long with a beam of 32 ft, she was powered by two 4 cylinder triple expansion engines giving her a top speed of 15 knots. 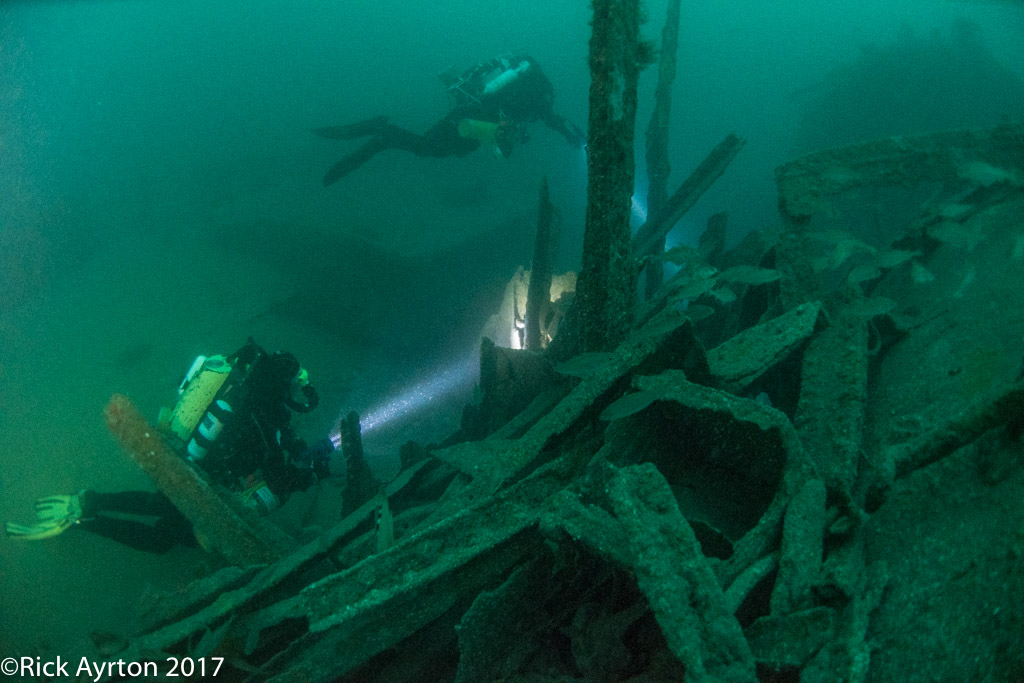 Divers exploring the wreck of Warrior 2

She changed hands within the family when Alfred Vanderbilt acquired her in 1914 and renamed her Wayfarer, Alfred was lost on the RMS Lusitania when she was sunk off southern Ireland in May 1915. 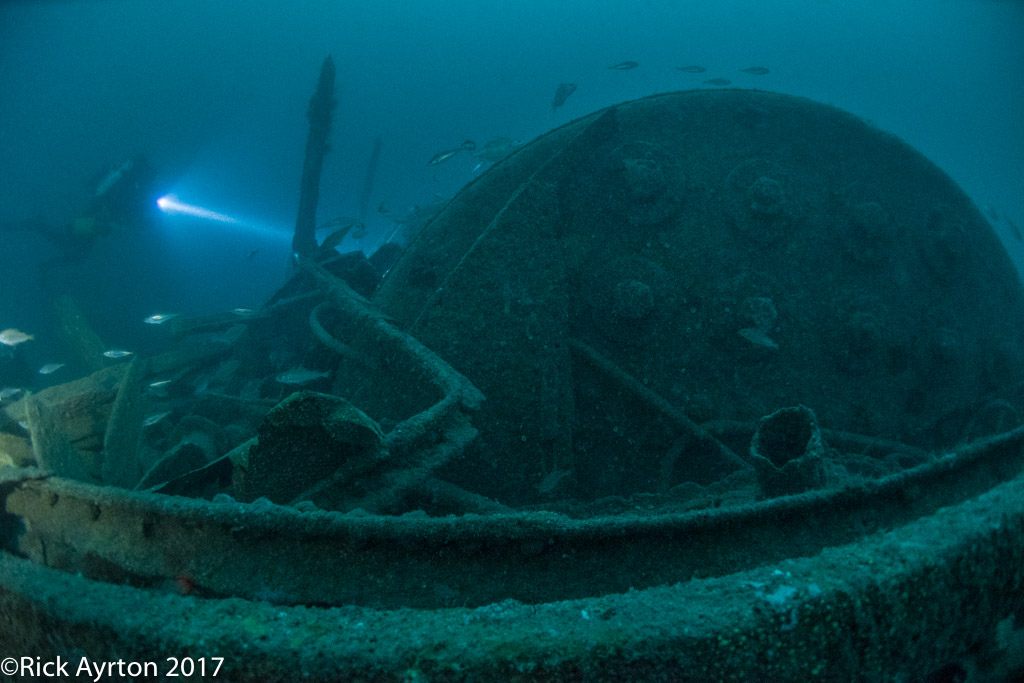 In 1916 she was purchased from Alfred’s estate by Alexander Smith Cochran, another American philanthropist who’s money came from carpet manufacturing, he reverted her name back to Warrior.

In 1917 she was requisitioned by the Royal Navy and became Admiral Grants flagship on a visit to Washington DC where she attended a memorial to those lost at sea during WW1 including those lost on the Lusitania. 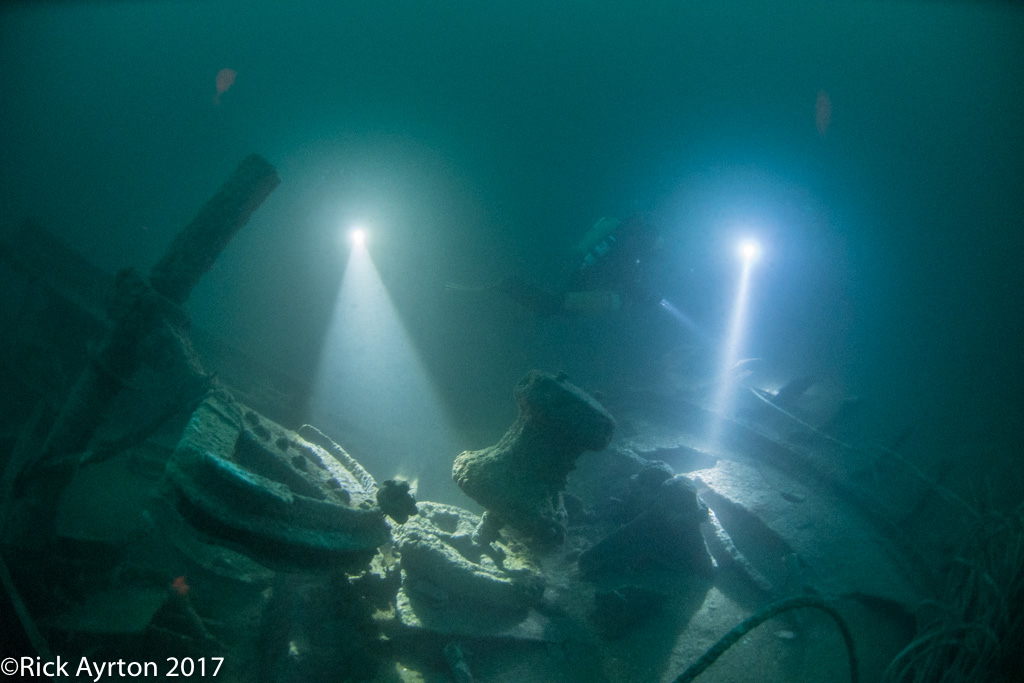 Divers illuminating the capstan at the stern of the wreck

After the war she was sold to a Spanish shipping magnate and renamed Goizeko Izarro (Morning Star in Basque). She was used as a hospital ship during the Spanish Civil War. Later she was sold again to Sir Hugo Cunliffe-Owen who was a director of British American Tobacco, he returned her to the original name: Warrior. 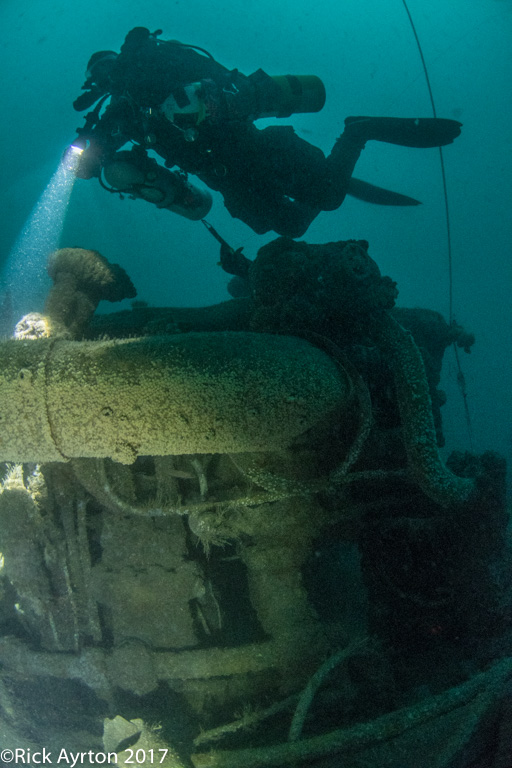 Diver over one of the engines

During World War 2 she was once again requisitioned by the Royal Navy, Stripped of her luxury fittings, she was armed with two 12 pounder guns and called HMS Warrior II, (There was another ship called Warrior in the naval fleet). She was given the role of Submarine escort, aiding submarines travel to and from Portsmouth.

Returning to Portsmouth on 11 July 1940, she was caught by a large number of German aircraft, she received a direct bomb hit, killing Chief Steward John Collins. The damage caused by the bomb was severe and the remaining crew abandoned ship leaving the Warrior II to sink into its current position south east of Portland Bill. 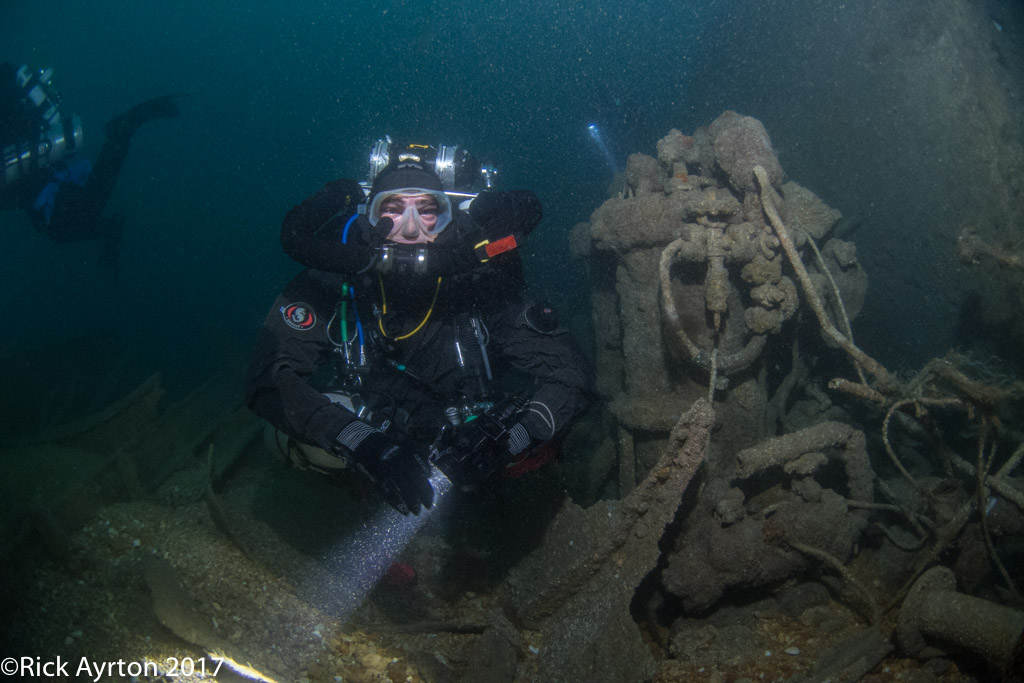 Tamas Szakmany beside some machinery near the engines & boilers

We find ourselves finning down the shot line to take a look at this jewel of a wreck, Warrior II lies on pebbles & course sand sea bed and is often blessed with better visibility than adjacent areas. Upon reaching the wreck and making checks that all rebreather systems were functioning as they should it was time to look around. The shot line is near the highest point of the wreck, the Engine & Boilers, there are 2 engines side by side, much pipework is present and the terminations of the several oilboxes are seen on the midships side of each engine, these oil boxes were favoured artefacts for recovery in the early days of diving this wreck. They can be seen on Wrecksite.eu 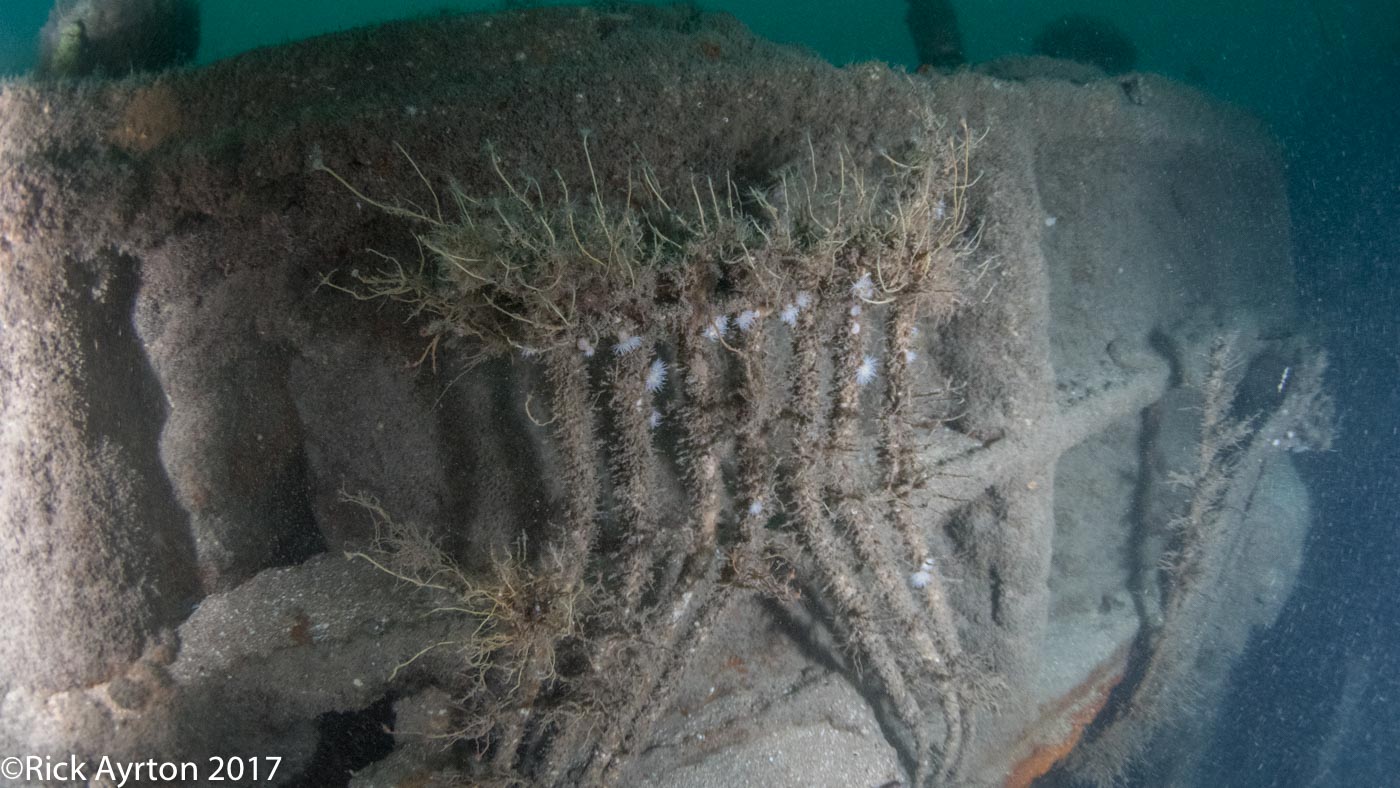 Pipe work but no oil box!

A number of substantial portholes remain solidly fixed on the wreck and a testament to the quality build of the ship. 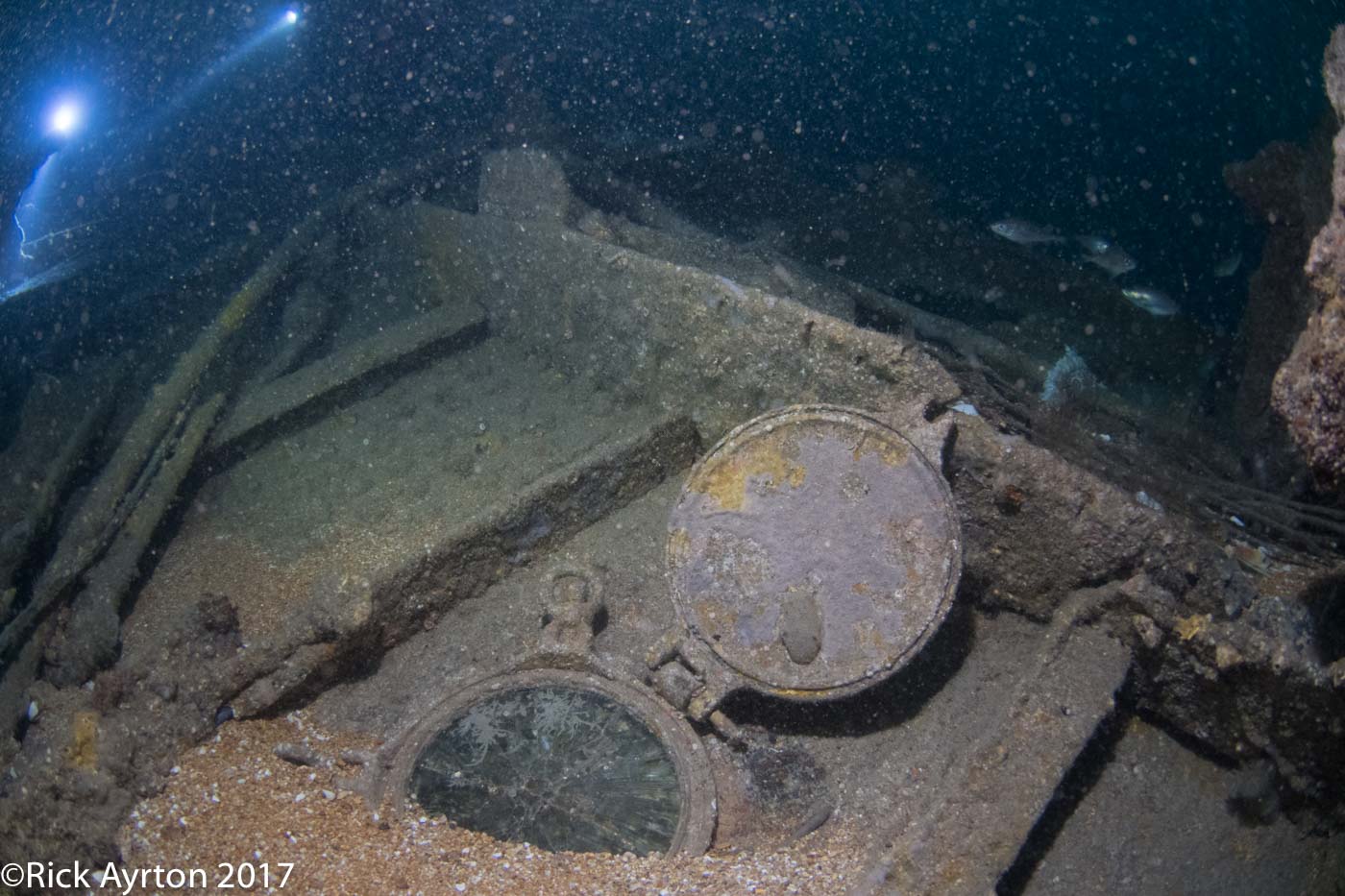 Moving aft from the engine at first appears to be nondescript, some frames covered with sand, then out of the foggy viz comes what looks like a roman mosaic, it is the remains of the swimming pool, this is one of the most extraordinary sights I have ever seen on a shipwreck. 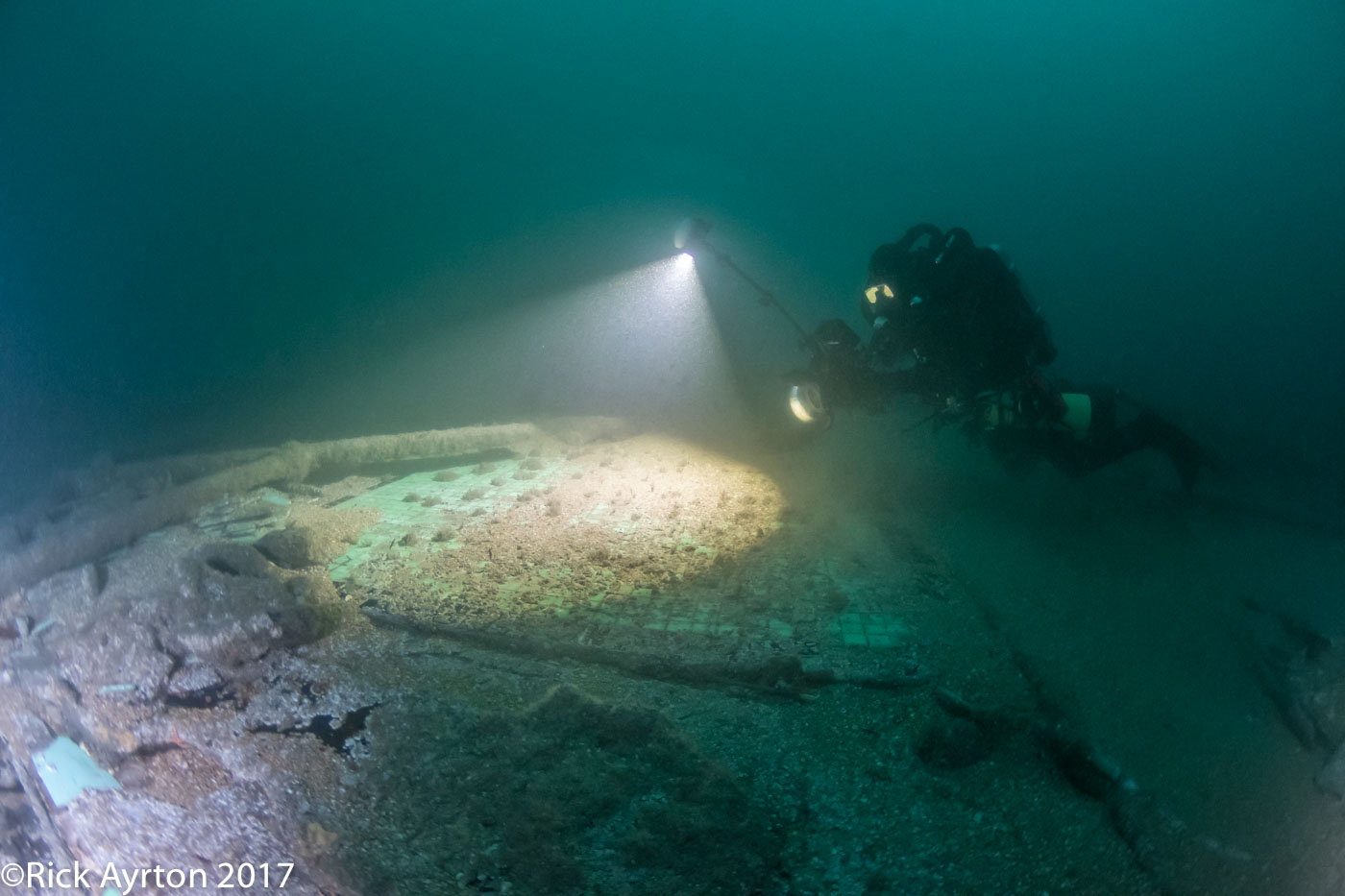 I have dived this wreck a few times and the sand swirls over the tiles making more or less visible depending on recent weather conditions. 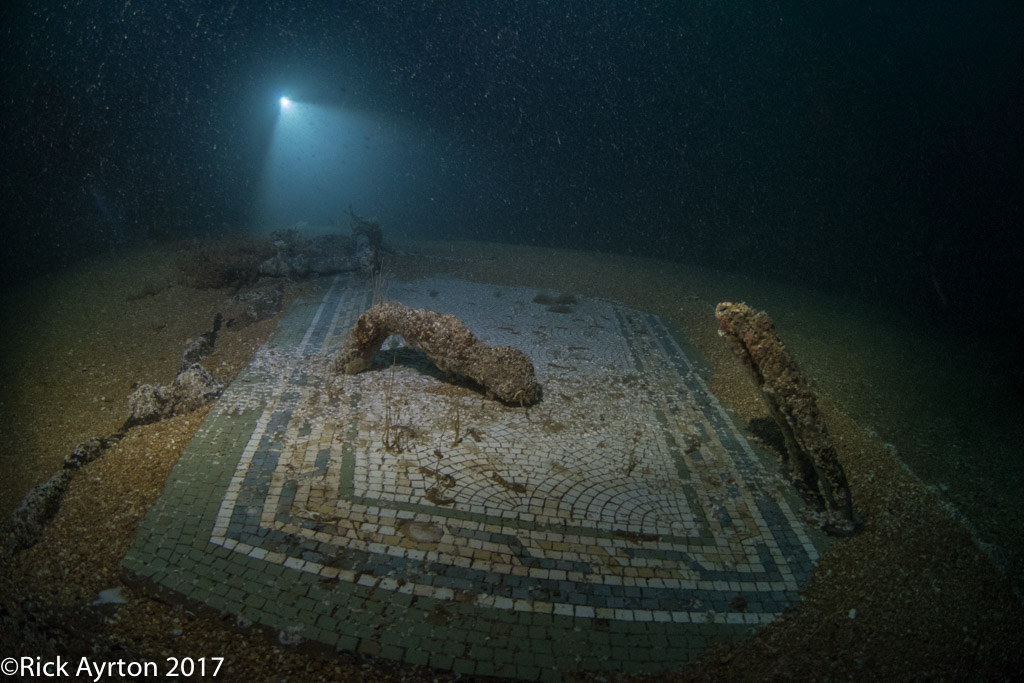 Mosaic tiling from the swimming pool

Sections of tile appear very solidly constructed, in keeping with robust construction of the ship. 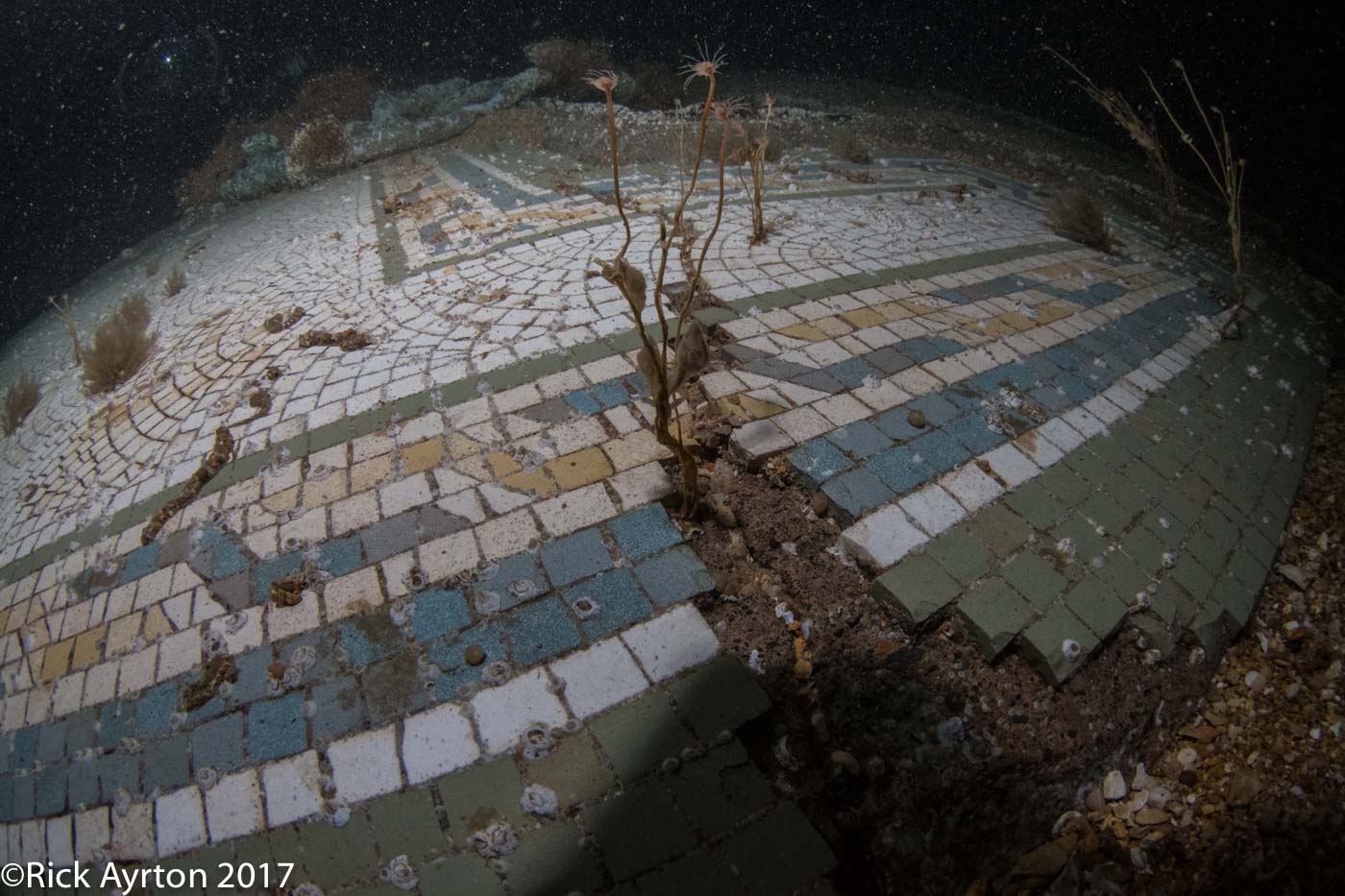 Further aft is a steering quadrant and capstan, there is no sign of the 2 propellors which are buried in sand beneath. 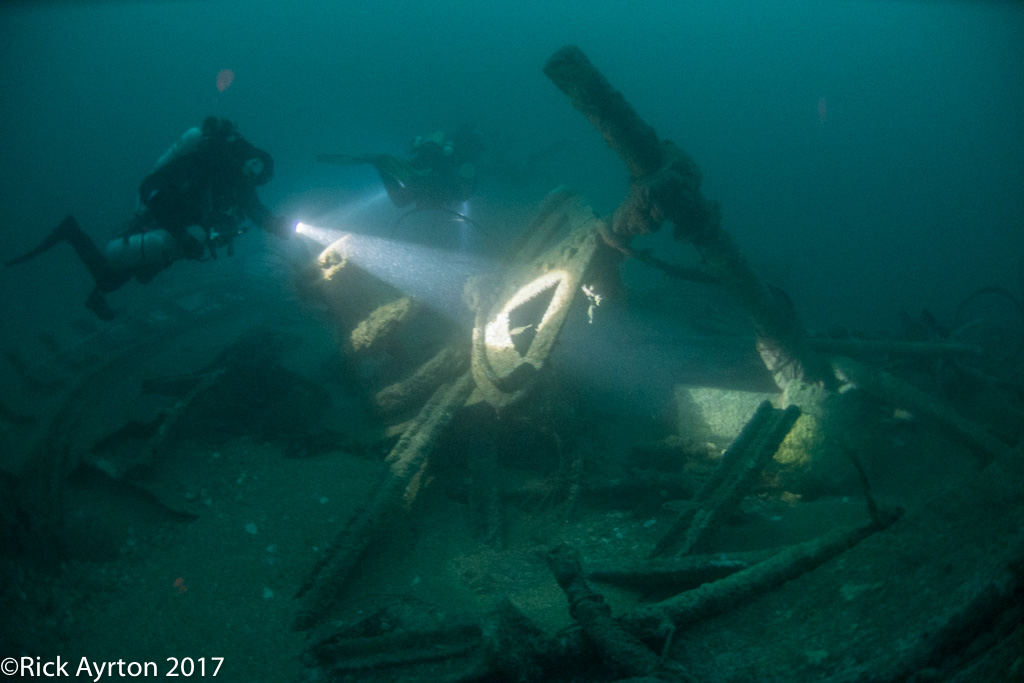 Lighting up the steering quadrant

Moving back forward over the tiles then engine followed by 2 boilers, arranged one behind the other, more pipe work and substantial brass fittings are scattered over this area. Before getting to the bows one of the 12 pounder guns can be seen lying on its side on the port side of the wreck, intact portholes still remain, some with glass.

Base of one of the 12 pounder guns

The bow section itself is a bit more substantial and stands a few meters proud, there is an anchor hanging down from the starboard rail. Further forward there is a circular hole in a bow bulkhead, this is where the bowsprit was fitted and the section forward is U shaped to hold it, the wooden bowsprit has long gone. 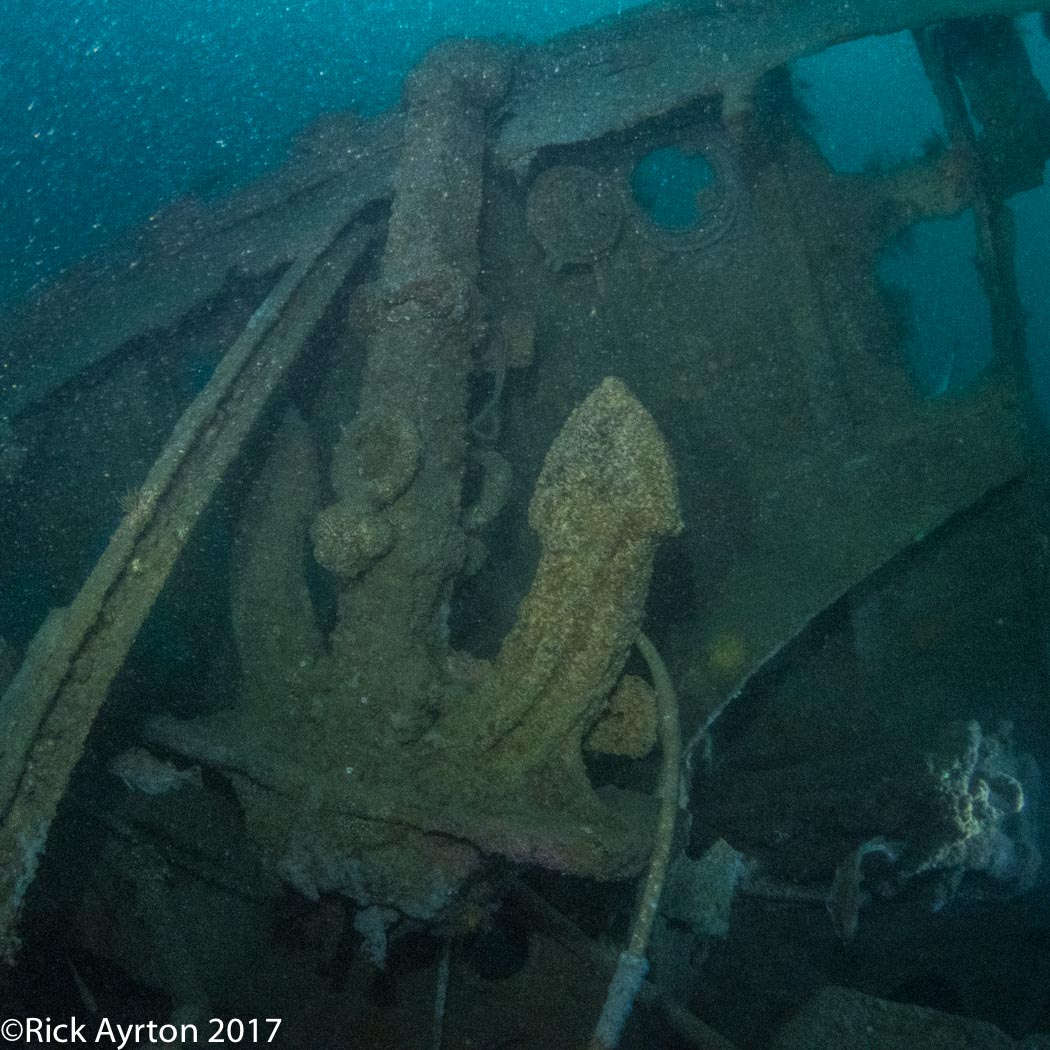 Anchor hanging from the starboard rail of the bow

Warrior II has a clipper bow reminiscent of the old sailing ships, moving above her this can be seen clearly and imagining the bowsprit in place you can really see heads turning as this fantastic elegant ship moved around the ports frequented by the wealthy in the early 1900’s. 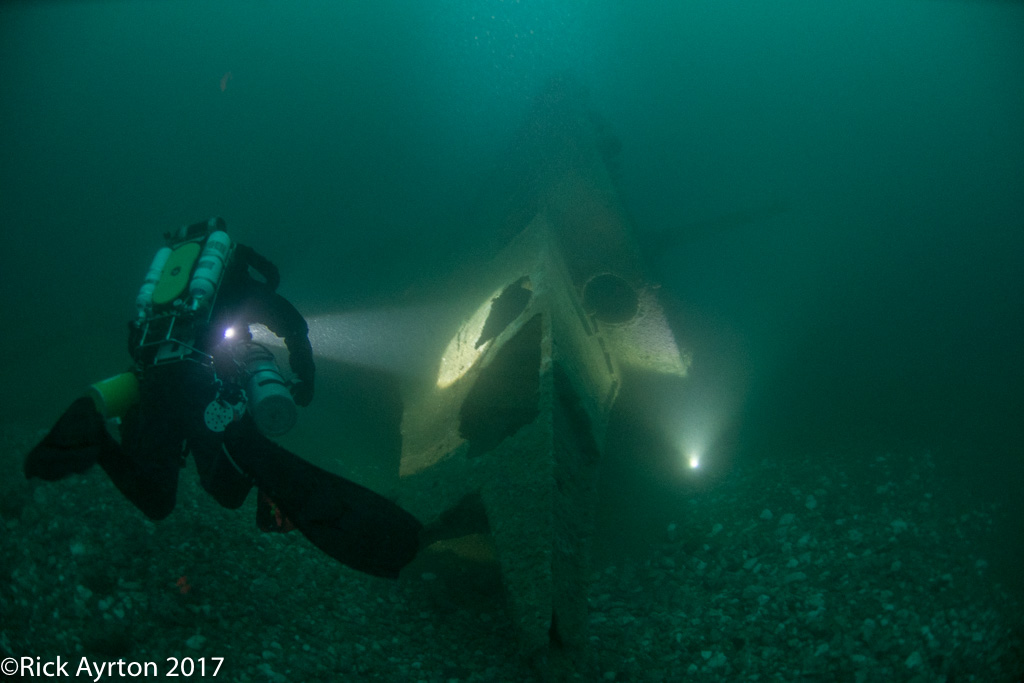 Checking out the clipper bow

With the limited time available at over 50 meters it was time to start the ascent, firing our DSMB’s to the surface followed by a gradual rise to complete our decompression obligation. Dive time available is enough to have a really good look around this fascinating wreck. It is interesting to consider that we are able to swim around the pool that in its heyday was used by some of the wealthiest people in the world.

Taking images on dark wrecks with limited visibility is not easy, the images here are taken from 2 dives with the majority taken in October, the visibility was estimated at 8-10m on the day. I am using a Nikon D500 in a Nauticam housing, settings were to make the most of modern sensor technology and iso was set at 2500, Lenses used were either a Tokina 10-17(June) or the Nikon 10.5 fisheye(October). A number of the shots were taken with the ambient light with a wide open aperture and 1/25 shutter speed, It is these shots taken with no strobe or video light that actually worked best. Although high iso allows capture of dark scenes it also picks up the flare of a torch or strobe(even on minimum setting), The shots where the light is added by divers some way from me seem to work well. Strobes & Video lights need altered settings but remain useful for the close in shots. A flare of backscatter from the strobes is seen on the images with high iso.

Rick enjoys both close-up & wide angle underwater photography, but particularly enjoys the challenge of taking images of wrecks and happily admitting that getting good images of deep UK wrecks is a fickle process with many variables that he is still trying to master.