In the world of science, we talk about “ecological succession”. This is a rather dry and unattractive term to describe something quite beautiful. Ecological succession describes the way in which an “ecosystem’ changes over time. This time frame might be throughout millennia or over a shorter period, within a relatively small space like a sunken wreck or across our deepest oceans. It’s what happens when a shipwreck like the HMS Scylla becomes colonised and begins to grow life. As divers we are constant witness to this “ecological succession”. It starts on a new wreck with a fine covering of algae and barnacles and develops into a reef packed with life.

However, in my mind the term ecological succession conjures up images of something which is quite linear that has a beginning and an end. But, it appears that there is no such thing in this crazy, chaotic world and that our environment and our lives around us, thankfully, constantly change in circles within circles without a clear beginning or end. Perhaps a more palatable term to describe this ecological succession is the great, “circle of Life.”

The Solace Stones celebrate this circle of life. I was delighted to be invited to dive them off the Dorset coast. I first heard about the Solace Stones shortly after the loss of a close relative. I was feeling reflective and grieving for the loss of a loved one contemplating the magnitude and importance of life and death. Hearing about the logical way in which these stones created life during a time of loss seemed beautifully befitting, comforting and emotive.

The Solace Stones are pyramids of pure, white stone before they are lowered to the sea bed. They have a lovely tactile, smooth quality to them and are reminiscent of the tombs built for the pharaohs and their queens. The pyramids also reminded me of the pyramids of biomass which were described to me at university. This describes the way in which energy is passed on at each trophic level. The trophic level represents the different levels of producers such as the seaweed or algae at the base of this pyramid, followed by the succession of the herbivores that eat the algae, the primary consumers that eat them and finally the few apex predators.

These very special Solace Stones, built using local Portland stone and designed in conjunction with Southampton University, had special holes and fissures on their surface. The holes are suitable for a variety of marine life from the different trophic levels to find solace. However, what makes these pyramids so unique is that there is also a space for the ashes of a loved one to be enclosed within the pyramid and covered with a plaque as a commemorative memorial to somebody whose final resting place is befitting of the sea.

I was diving with local O’Three director Marcus and we travelled out to the stones with Pete from Dive Beyond. Looking at the wide expansive horizon I imagined how comforting it must be for those who are grieving and taking their loved one’s “solace stone” to its final resting place. The sea has a wonderful restorative quality that heals and soothes our salty souls and perhaps makes us recognise the small but not insignificant part we play in this great interwoven planet of life.

Initially, we were to dive a stone which had been laid fairly recently. As we descended, the pyramidal monolith appeared from the depths and had a wonderfully atmospheric air of peace, calm and solidity. The stone was still white but the surface of the stone had started to encrust with the very first layers of that “ecological succession” – a fine layer of algae.

The stones are intended to not only act as a commemorative memorial but also a living reef which will help reseed the local marine life in the area. The fissures at the base of the pyramid were specifically sized to fit young lobsters. I hoped to see some crustacean lurking in the fissures and holes of the solace stones.

Not so very far from the solace stones lies a lobster restocking reef which had been developed for young lobsters. Juveniles had been released to help seed and nourish the natural lobster populations by allowing them to grow on to sexual maturity. Two thousand tonnes of Portland Stone were placed on the seabed just before the London Olympics in 2012 as a habitat for these lobsters.. I wondered if this freshly laid solace stone might have any signs of creatures such as the lobster using the holes and fissures as a protective home from predators. There were signs of burrowing around the holes but no residents…yet.

It wasn’t until I got my photos up on the computer post-dive that I realised the commemorative plaque of this stone laid in only July 2016 had a little Clingfish swimming on its surface as a gentle nod to the life that would soon flourish here with Paul Bromley, “a brave husband” now in his time of rest creating a reef of life offering a protective area for life to reside. This seemed such a befitting and honourable memorial to a brave man.

We swam on to find the other solace stones which had been laid here in June 2014 and September 2015 and Marcus offered me to go ahead so that I might be the first to arrive at the stones and capture any life on camera. I had everything crossed that we might see something but as is the way with marine life – there are no guarantees.
I was immediately struck by the softened glow and gentle appearance of the older stones. The stones were now covered in a host of life – enough to keep any diver with an interest in “squidge” happy. There were barnacles, tunicates, bryozoans and all manner of invertebrates encrusting the stones. The white stones could be seen no more and instead life. Resplendent life everywhere you looked.

Immediately, I saw an eel at the base of the first pyramid which, I assume, had cleared an area under the pyramid as a safe haven to rest. The Conger Eel looked at me with apparent suspicion and slowly swam from the pyramid while a Leopard Spotted Goby swam in to the space that the Conger left. How wonderful. Life was really finding solace amongst the stones. It didn’t take long before I realised that the Solace Stones had become a living, breathing reef for a multitude of invertebrates, crustaceans and vertebrates. The larger holes higher up on the stones were home to Edible Crabs who looked very comfortable in their relatively new home.

As I approached the final pyramid, a good-sized lobster scurried across the sea bed and seeing my intrusion, backed into a hollowed out space below the pyramid – finding solace yet again. It appeared that this hopeful aspiration of creating a living reef to help restock lobsters and generate a full circle of life had come to fruition after just two years.

Before we left the pyramids I took a photo of it in tis full life-covered glory. The hard edges softened by the bryozoans and a torch light shone down on the peak of the pyramid, giving it an ethereal glow. I noted the inscription of the stone, “Peter Anthony Noice…A Gentle Man”. This gentle man had, in turn, created a soft, gentle space for an entire community of marine life. I felt grateful to this “gentle man” for allowing me the chance to have this enchanting experience.

Surfacing to a gratefully received hot squash and chocolate bar I was left exhilarated, contemplative and touched by what I’d seen. It took some time for my thoughts to clarify and become logical. I went on this dive to see how in our death we might create life but I discovered more than that. The reef isn’t just a lovely memorial but it’s also fast becoming a unique dive site. The sea bed surrounding the stones is covered in mostly dead current-washed maerl and fluttering Queenie Scallops. The odd Goby darted from point to point on the not uninteresting sea bed but somewhat lacking in diversity. The Solace Stones created a safe haven for other life which made the sea bed sparkle all the more. But as well as witness that, there was something incredibly comforting, consolidating and life-affirming about diving the Solace Stones. I hoped to dive them again.

In life we too often avoid discussing death and then when it does come to us we are somewhat surprised that it should befall our loved ones despite the fact that it does, with such certainty, come to all of us. Our goal in life shouldn’t be to live forever but to create something that will. Through the Solace Stones, salty souls have a way of creating something beautiful that really will last forever. The Stones can also be enjoyed by others as old life begets new and the great circle of life continues to swirl and spin around them creating change and radiant life – in that we can all find solace.

INFORMATION
DIVING & ACCOMMODATION: Maya stayed at Sea Barn Campsite www.seabarnfarm.co.uk and dived with www.divebeyond.co.uk and for further info on the Solace Stones www.solacestones.co.uk
PRICES: £20/night camping
WHEN TO GO: Throughout the year.
TOURIST INFORMATION: www.visit-dorset.com

Marine ecologist and television presenter Maya Plass has long been obsessed with our seas and oceans. Her working life as a marine educator is spent on or near the water sharing her knowledge and love of the sea, in particular the British coast. Maya is a qualified HSE scuba diver and loves any opportunity to promote the sport to the next generation. She is author of RSPB Handbook of the Seashore and has presented on BBC Springwatches and also appeared in a Wickes advert with Farne Island seals.

Head of Communications at the Marine Biological Association 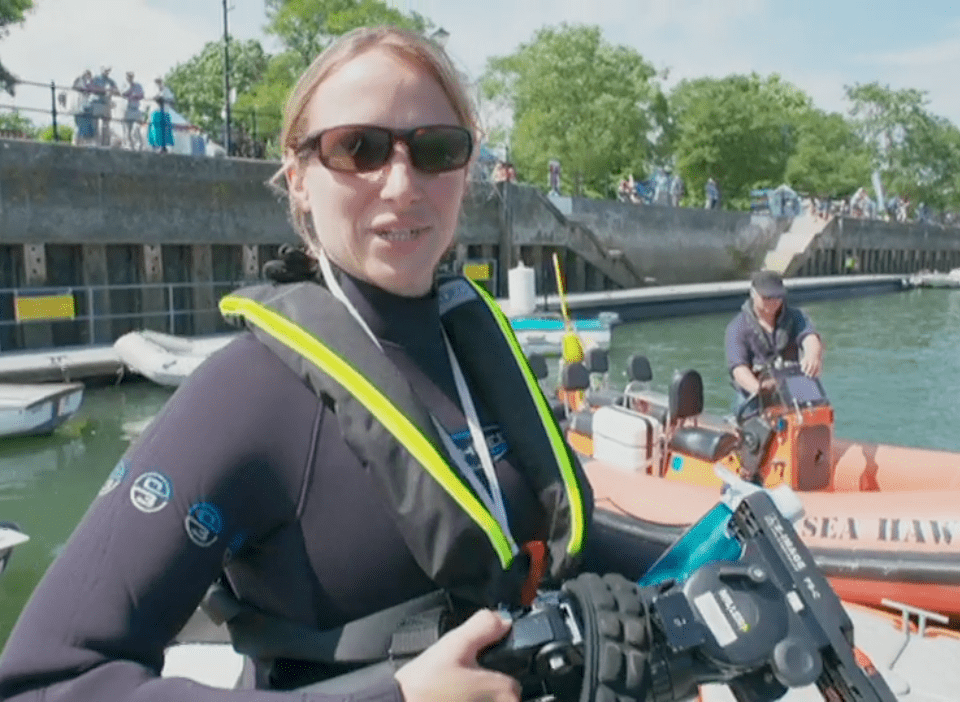