Head of Communications at the Marine Biological Association

Divers from the drone.

… drinks are free – well they certainly were during the O’Three treasure hunt weekend earlier this year and the scallops and the sandwiches… anyway. That’s when Sean handed me a pair of these “new fangled” zipperless boots. I had been complaining that the zips on my (now old) pair of boots (boot brand to remain nameless) keep coming down after just a couple of furious fin kicks. Of course I could have tucked them under my wetsuit, which solves that problem, but sometimes when the sea temps call for it, I’m simply wearing shorts.

“Diving is fun” face – Will Appleyard.

A week later, I was slipping them into my fins on the island of Saint Lucia – visiting the island to document coral and brittle star spawning. The first thing I noticed about these boots was the way they felt when I slipped them on. Now bear with me here and I promise you that I’m not (totally) weird, but it did feel like pulling on a brand new pair of socks – if you follow? No? Oh well. I had just hoped that this feeling was not just a one off – which to a point it hasn’t been. Unlike the sock thing, which is just a one off “hit”.

Not a reason to buy a pair of wet suit boots I know. Let’s move on – I enjoyed the fit of these boots too, the extended height of the ankle feels more supportive than any other boot I have worn before and of course the strap that replaces the zipper put my original woes and reason to change them to rest. Job done, – no more baggy boots. O’Three claim that they “flush less” than a conventional boots do too. Well, I concur, after having now worn them for 45 dives. So, if you’re a wet suit wee-er, then you’ll be pleased to know that you’ll be tipping less of that out of your boots on the dive deck from now on. The little ridge at the heal holds the old fin straps in place too – very nice. And, the boot’s sole design riding up the sides should prevent wear and lengthen their lives – better for the environment for sure. And so, with genuine satisfaction achieved with these zipperless boots – there is just one problem left to deal with – wet suit boot blisters! I guess wearing socks underneath is the only way to prevent those, unless someone has a better idea?

Hoods – also great for packing your strobes in.

Why do you wear a hood in the tropics? I’ve been asked this on a few occasions. I always wear a hood when diving, even if I’m just in shorts. Firstly I find the dive too noisy with regulator bubbles flying past my ears and secondly, after too much exposure to seawater, eventually my inner ear begins to throb. I must have done 100 dives this year in my 2mm hood and this bit of clobber keeps my ears in check without overheating me. Hoods are also great for stuffing camera strobes in when travelling and of course shading ones beer post dive.

Divers from the drone.

Above all, my top tropical piece of kit for warm water diving has to be the O’Three 0.5mm deep skin tech vests. It’s been in number one spot for a couple of years now. My version comes with the yellow O’Three logo on the front and on the arms, although I gather that this has now changed. I like the splash of yellow against an otherwise very dark diving wardrobe. If the water is around the 28 degree Celsius mark, I tend to feel too warm in a full-length neoprene wetsuit. Yet, I do want something a little more than just a rash guard and this piece does the job nicely. It dries super quickly and having dragged it through perhaps 250 dives, there is not a single sign of wear on it. It’s been left in the sun for two weeks recently on the dive deck of an Indonesian live-aboard and still retains its shape and the black is still black.

Remote islands of The Banda Sea.

Steve Warren tested this top for Diver magazine fairly recently and from memory, I believe even tried to get him self sunburnt in it to prove its UV protection one way or another (you’re working too hard Steve). Now, I love O’Three, but I am not willing to go to those lengths to determine its worthiness. I can report however that it did keep the midday sun off my skin on the Banda Sea recently while trying to catch a drone bobbing about in a tender boat – FYI, don’t try that when it’s too windy! Although it will do little to save you from the titan triggerfish, the 0.5mm tech vest did seem to keep the olive sea snakes from doing there worst (or best) while on assignment at the remote location of Manuk Island.

More than I can say for the Patagonia running shorts I was diving in at the time, although I guess in their defence, they’re really only designed for running. It’s my understanding that the American diver behind me that day has some Gopro footage of said incident – let’s see if it surfaces. You can read more about the snake / shorts debacle and the whole Banda Sea adventure in a soon-to-be-published issue of Diver magazine.

Manuk Island or “The Island of Snakes”. 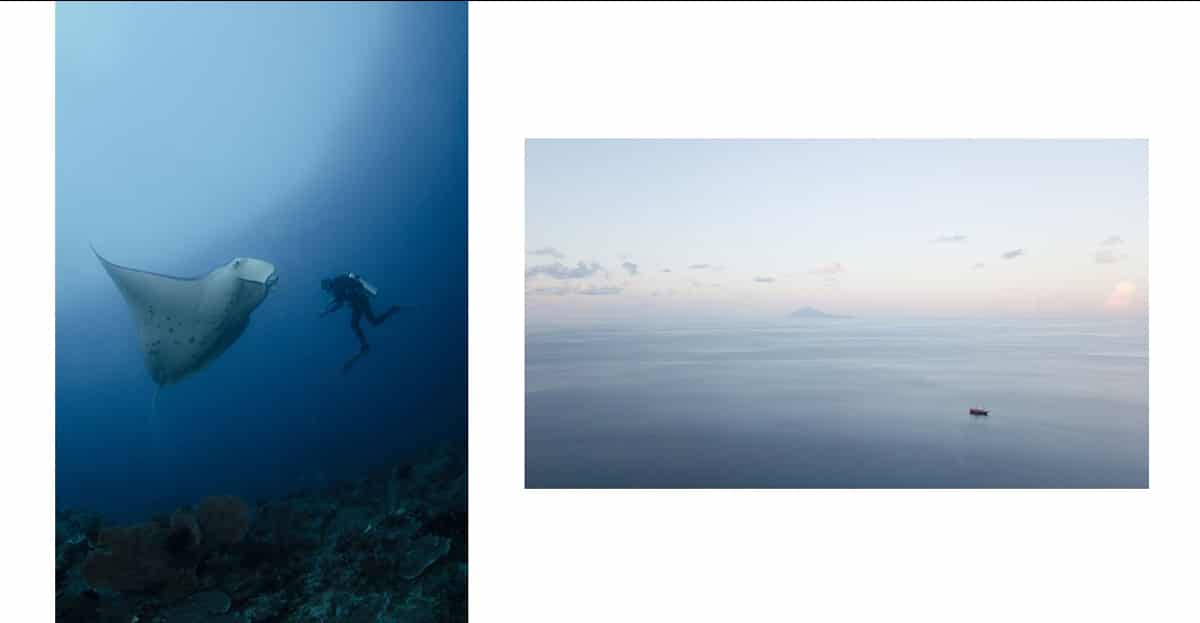